Since it played such a key role in the history of Arvin radios, we wanted to have a few images of the 2-tube Model 40 radio here again, as well.

Thumbnails of some 1939 sets and Documentation below - For a hi-res album of advertising documents, click HERE. 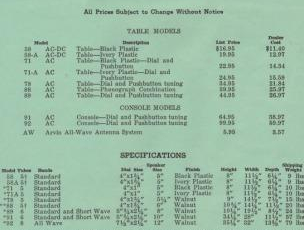 While 1939 was a year in which only nine new models were released in the model year roll-out (The Model 40 - Mighty Mite - Arvinet was also selling in 1939 after its late 1938 release, so there are a few images of it, also).  This is in stark contrast to the large number of models introduced in the Phantom Line the previous year.  War jitters from the situation in Europe?  Successful 1938 line-up still selling?  Lots of inventory of the Phantom models?  Who knows!  But we do know that many of these are highly collectible.