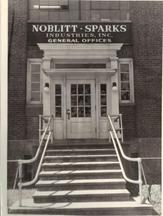 Here is an aerial photo from the early to mid-1960s.  Engineering wing is on the left, administrative wing is on the center and right, and the former manufacturing portion of the building is at the top center and left center.  The former Golden Foundry and its parking area are at the top of the photo.  Fire Station #2 is partially visible in the lower left, and some of the houses that were later purchased and razed to make room for the QGN Plaza park are on the left center of the photo. 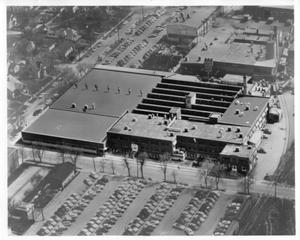 Of all the administrative sites in the history of the company, the 13th Street site in Columbus has the longest history.  After Q. G. Noblitt moved the headquarters from Indianapolis to Columbus (his hometown) in 1931, business was good and the need for more space occurred shortly thereafter.  Fortunately for Noblitt-Sparks, this property at 13th & Hutchins Streets came on the market, and it was purchased from the owners of the Lincoln Chair Company in 1935.

Administrative services were moved from 17th Street and manufacturing on radios was begun in the last half of the 1930s.  Looking at the building from the front on 13th Street, the building appeared to be a two-story building with a basement, but in reality there were five or six different levels scattered up-and-down and round-about the building.

Wooden floors and massive eight-inch wooden posts scatted throughout the building, the character and charms of the building were obvious when listening to the creaks and groans every time someone walked across the floors.

Seven of the company's first eight presidents had offices in the building at some point in their careers:

At some point in time, the building housed virtually every type of company services, from administrative to IT to engineering to manufacturing.  Headquarters was moved to QGN Plaza in 1989, and then services were gradually shifted to other locations.  Operations were gradually moved to other sites over the ensuing years; and the last, the IT operations, vacated the facility in the early 2000s, a couple years after the merger that formed ArvinMeritor.  The building was "sold" to the United Way of Bartholomew County and is now the Doug Otto United Way Center, housing over two-dozen United Way agencies.