Below, you can see a few thumbnails for advertising materials the company printed for 1961.  You can click here for a hi-res album of these and other 1961 documents.

1961 might well be the year Arvin could actually say they were a major player in the U. S. radio industry.  They cracked the one-million barrier in radio production for a single year (see picture below) and they had an ever-expanding offering of both portable and table top models.  Color was still a big deal as sets were offered in a variety of colors.  At some point, we're planning to compile a list of all the color names they used in the 50s & 60s.  Could be entertaining?  Check the bottom of the page for links to albums for various 1961 models.

Below is a dealer display for shirt pocket and coat pocket transistor radios with the corresponding radio sets in the appropriate slots.  You can see an unused such display unit on the 1960 Radio Page. 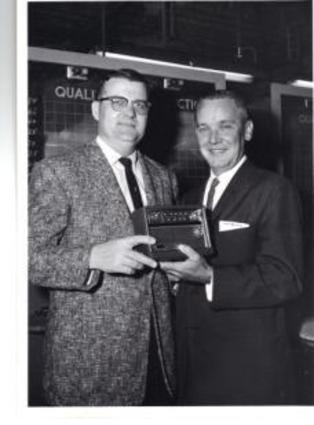 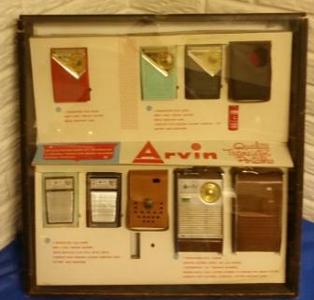 To the left is a photo of Pick Crockett (Radio plant manager) and Eldo Stonecipher (Arvin President) holding one millionth radio produced in 1961, a major milestone for the company!