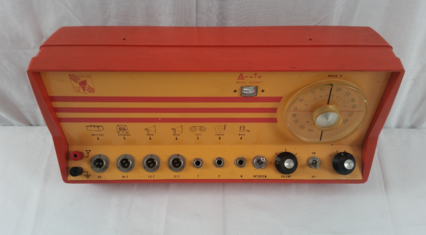 At this point, we have a single item that appears to be a dedicated item for the war effort in Vietnam.

While very little has been found documenting this radio set, we do have a nice example of one, courtesy of Archie Kappel, Sr., former Arvin Electronics employee.

We do know these were part of the Strategic Hamlet Program.  The program (Vietnamese: Ấp Chiến Lược) was a strategic plan implemented by the South Vietnamese government from 1961 to 1963 in rural areas with the advice and financial backing from the US. Its purpose was to isolate the rural population from being influenced by the National Liberation Front, more commonly known as the Viet Cong.

More details about this program are given in this Pentagon Paper:

This radio was one of the models manufactured by US companies and distributed at no cost to those hamlets. We are told we are very fortunate to have one in such a good condition. This particular model has two outputs for sounding alarms with horns and another output for a loudspeaker to make announcements or hear ouputt form one the other input devices. There were other US radio manufacturers contracted by the US government for this program or its successor. One was reportedly Trans-Aire Electronics Inc., although Trans-Aire sets appeared to more simple radio receivers only.

As you can see from the accompanying photo, it has inputs for a microphone, a tape deck, and a phonograph, aside from containing its own radio tuner. The unit is powered with external 6V battery (see connections for all in photos). There is a close-up of the logo / symbol that is in the upper left-hand corner of the set; and if anyone can provide a translation, please share with us! This radio was gifted to us many years ago by Archie Kappel, Sr. who worked in the Electronics Group of Arvin "back in the day". Aside from being the only radio we've ever come across in this color combination (note the three horizontal orange bars are similar to those used in the South Vietnamese flag), it's the only wartime Arvin model we've seen from the era.

Certainly is a brightly colored set.