It's nice that they featured a chairside model on the cover here.  The Arvin Chairsides are among their most rare models and are valued by collectors.  And the years of 1937 and 1938 are the only years they were produced.

What we don't know is whether this is the original Phantom lineup to replace the Rhythm models that were offered earlier in 1937 per the following brochure announcing 1937 radios featuring Rhythm radios.  That's probably a decent theory, since there are a couple Rhythm models carried over into the Phantom catalog?

Lots of things were about to change in the next year or two --- metal cased sets were about to be introduced by the company, bakelite cabinets would soon be pushing the more expensive wooden cabinets aside, radio sizes were going to begin to shrink, and a World War would soon be looming on the horizon.  So, now is a good time to just look and appreciate the beauty and elegance of many of these classic wooden cabinets.  Even the cover at the right says, "Elegance"! 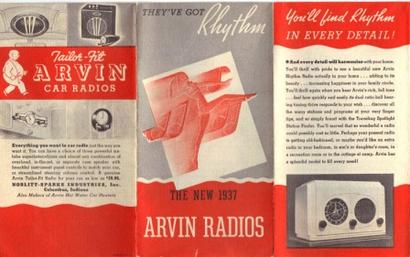 Thumbnails of the catalog below:

1937 was a huge year for Noblitt-Sparks and its emergence as a major radio manufacturer.  Time-wise, it's also a little confusing.  While they were celebrating their previous year's success with the Rhythm Series, they were not resting.  The introduction of their 1937 line featured their "Phantom Filter Circuit".  The Phantom Series, as it came to be called, had a huge line-up of large and small models and also spanned into 1938 and even a little beyond.

Below is a nice, 8-1/2 x 11 catalog that contains 24 wonderful pages.  While not really sure about the date of this catalog, the cover states that it replaces a catalog from May of 1937.  Given the company history with timing on major releases of major radio product lines, one should probably assume it was released in October or November of 1937.  As such, it is probably announcing what they intended to be their major 1938 lineup.  We felt it appropriate to include it in this 1937 section.  We're in for 30+ years of mixing and matching and over-lapping calendar years and product years!  Might as well get used to it now!! 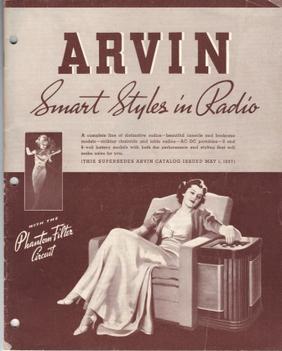