Click here for a Hi-Res view of this brochure 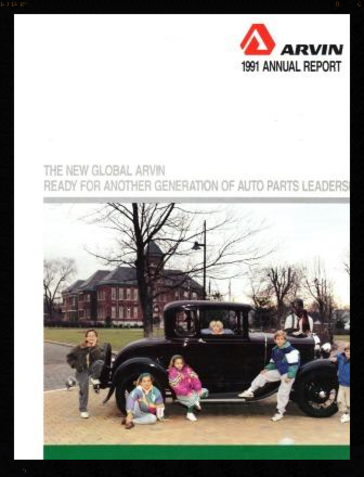 The building was also featured as a backdrop on the cover of the 1991 Annual Report.

We  thought it might be nice to make QGN Plaza the first of the facilities added to the PreservingArvin website.  While it represented a short-lived facility for Arvin's history, it was one of the older buildings ever occupied by portions of the business;   and the building and the grounds got their names from the company founder Q. G. Noblitt.

Originally constructed as the Maple Grove School in 1896 (later renamed Garfield School during the early 20th century), it did not become an Arvin facility until the late 1980s.  Arguably the most attractive building on the list of Arvin properties, it would only remain an Arvin property until the early part of the 21st century.  Shortly after the merger that formed ArvinMeritor in 2000, the property was sold to the Bartholomew County School Corporation to become their administration building.  It seems fitting that the building has come full-circle and is again an educational facility.

When Arvin acquired the decaying facility in the 1980s, they embarked on a renovation and construction  project that more than quadrupled the footprint  of the property and surrounded the building with lovely landscaping, a pond, fountain, and waterfall on a two city block setting.

Originally designed by Charles Sparrell, the most prolific architect in Columbus' 19th century growth, the expansion project successfully extended Sparrell's design concepts to the addition and made a wonderful addition to Columbus' architectural portfolio and heritage.  Below is a 4-page pocket brochure  that Arvin distributed when the facility was opened in 1989.