***  We'll be adding much more information about Arvinyl at a later time.  ***

When found, the Red 8573 above still had the  original hang tag attached to the cord (it could be powered either with batteries or AC).  They described the unit as well as the Arvinyl case. 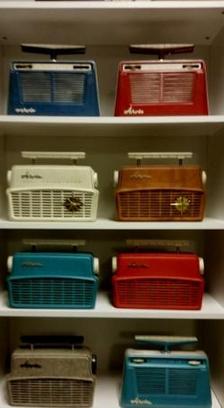 Introduced in 1955, Arvinyl and Arvinyl uses began to be actively marketed by mid-year 1956.  Arvinyl was prominently discussed in the 1956 Annual Report and went on to have a exciting life in the Arvin story.  While it was used in a wide range of products (such as appliance cabinets and automotive components), a shot of some 1957 & 1958 radios might be a nice, colorful introduction to Arvinyl.  The top four radios below are early transistor sets, and the bottom four are some of the last tube portables Arvin sold.  All have cases crafted from Arvinyl over aluminum.